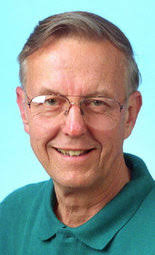 David Wikman is a native of Muskegon and a product of the Muskegon Public Schools. His undergraduate work was completed at Hope College and his Master of Music degree is from Western Michigan University. Additional conducting studies were completed under Herbert Butler, Kenneth Schermerhorn, and Robert Shaw.

Mr. Wikman started his teaching career at Reeths-Puffer High School where he formed the Madrigal Singers. He went on to head the choral program at Muskegon High School for 28 years. During his tenure at Muskegon High, he led the Madrigalians in two well-received European tours. In addition, he compiled a record of first division performances in choral and ensemble festivals.

Wikman formed the Muskegon Chamber Choir in 1963 and has conducted most of its performances since its initial concert in April of 1964. He brought the Chamber Choir to Carnegie Hall for a widely acclaimed performance in 1988. He has continued the Choir’s tradition of excellence with oratorio performances and regular concerts, both sacred and secular.

As a baritone soloist, Wikman has appeared with the West Shore Symphony Orchestra, the Lansing Choral Society, the Battle Creek Symphony, the Manistee Symphony and Chorus, the Zeeland Choral Society, and the Blue Lake Festival Orchestra. A Baroque specialist, he has been widely heard in the works of Bach, Handel, Purcell, and lesser-known Italian composers. As a chorister, he has sung J.S. Bach’s Mass in b minor and Beethoven’s Missa Solemnis with Robert Shaw and Brahms’ A German Requiem under Michael Morgan. In addition, he a busy Michigan School Vocal Music Association’s Adjudicator for both choral and solo and ensemble festivals.

For a number of years he was a bassoonist with the West Shore Symphony Orchestra, the Grand Rapids Symphony, and the Bach-Mozart Festival Orchestra of Northern Michigan. As a substitute player, he performed several concerts with the Chicago Symphony Orchestra under the legendary Fritz Reiner.